I. Key parameters in the technical specifications of photovoltaic modules

We often say that we use 255Wp PV modules. The â€œpâ€ in the table below is an abbreviation for peak, which means its peak power is 255W. All technical specifications are marked with "standard test conditions." The following figure shows part of Changzhou Tianhe's PV module specification (250W, the same below). 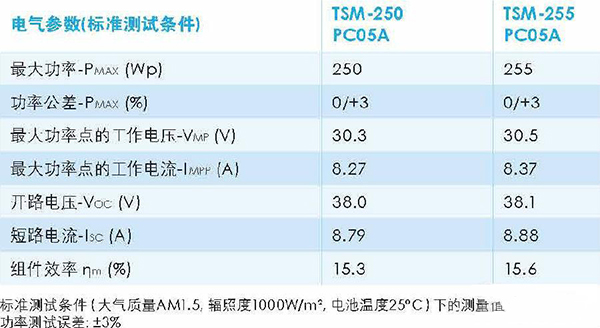 Only in the standard test conditions (irradiance 1000W/m2, battery temperature 25 Â°C), the output power of the PV module is the "nominal power" (250W), the power will certainly change when the irradiance and temperature change. In addition, the power error is plus or minus 3%, indicating that the actual power of the component is an increase from 242.5 to 257.5W. However, the power deviation of this component is a positive deviation of 3%.

In non-standard conditions, the output power of photovoltaic modules is generally not the nominal power, as shown below.

This effect can severely damage solar cells. Some of the energy generated by illuminated solar cells can be consumed by shaded batteries. The hot spot effect may only be a piece of guano.

In order to prevent the solar cell from being damaged due to the hot spot effect, it is preferable to connect a bypass diode in parallel between the positive and negative electrodes of the solar cell module so as to prevent the energy generated by the illumination device from being consumed by the shielded component. When the hot spot effect is severe, the bypass diode may be broken down, causing the component to burn out, as shown below (pictures from TUV-Rheinland). 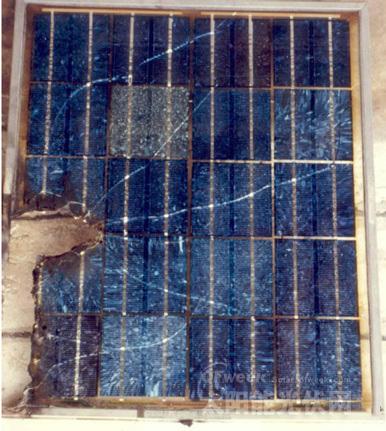 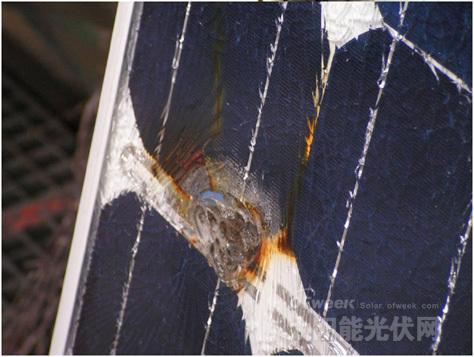 PID (Potential Induced Degradation) is a battery component that is subject to high voltage for a long period of time, which causes leakage current between the glass and the package material. A large amount of charge slams on the surface of the battery slice, which deteriorates the passivation effect of the battery surface and causes the component to deteriorate. Performance is lower than the design standard. When the PID phenomenon is serious, it will cause a component power to attenuate more than 50%, thereby affecting the power output of the entire string. The PID phenomenon is most likely to occur in high temperature, high humidity, and high saline-alkaline coastal areas.

The main reasons for the PID phenomenon of components are as follows:

1) System Design Reasons: Lightning protection grounding of photovoltaic power plants is achieved by grounding the components of the edge of the square array. This creates a bias between the individual components and the frame. The higher the bias voltage of the components, the PID phenomenon occurs. The more serious. For the P-type crystalline silicon module, the negative polarity of the module frame relative to the battery plate is effectively prevented from occurring due to the negative pole of the inverter of the transformer, but the negative electrode grounding of the inverter will increase the corresponding system construction. cost;

2) Photovoltaic module causes: The external environment of high temperature and high humidity causes a leakage current between the battery plate and the grounding frame, and a leakage current path is formed between the packaging material, the back plate, the glass, and the frame. The use of changing the insulating film Ethylene vinyl acetate (EVA) is one of the ways to achieve the component anti-PID. Under the condition of using different EVA packaging films, the anti-PID performance of the components will be different. In addition, the glass in photovoltaic modules is mainly calcium-sodium glass, and the influence of glass on the PID phenomenon of PV modules is still not clear.

3) Battery Cause: The uniformity of the cell sheet resistance, the thickness of the antireflection layer, and the refractive index all have different effects on the PID performance.

Third, the performance of photovoltaic modules

What is the decay rate of PV modules after 1 and 25 years of operation? For 25 years too long, there may not be a power station that has been operating for such a long time. According to national standards, the decay rate of crystalline silicon cells for 2 years should be within 3.2%. However, this data is really hard to say for three reasons:

2) The accuracy of the instruments used in field tests is poor, and it is said that errors within 5% are acceptable. Using an instrument with an error of 5%, the attenuation of 2% (1 year) is measured, and the difficulty is somewhat large, and the result is doubtful.

3) The difference between the test conditions at the site and the laboratory is quite large, and the time at 1000W/m2 and 25Â°C is too small! Therefore, it is necessary to perform a conversion from the test value to the standard value, and the output power and irradiance are only positively correlated in a very small interval. As shown in Fig. 2, even at 800 W/m2, it is not positively correlated. Therefore, there must be errors in the conversion.

In addition, many components may appear to be -3% power deviation, not decay, 3% will be lost directly ... ...

When there is a problem with the photovoltaic module, the local resistance increases and the temperature in the area rises. The EL tester is just like the X-ray machine in our physical examination. It can perform physical examination on the PV modules. Through infrared images, according to different temperatures, the images show different colors, which makes it very easy to find many problems of PV modules: cracking. , hot spots, PID effects, etc.

Photovoltaic modules are easy to be stepped on and bumped during transport, handling, installation, etc., resulting in unobvious cracking of components and greatly affecting the output power of the module. It can be detected by EL change, as shown below.

The photo below shows the infrared image of the hot spot phenomenon (picture from TUV-Rheinland). The red dot is where hot spots occur. 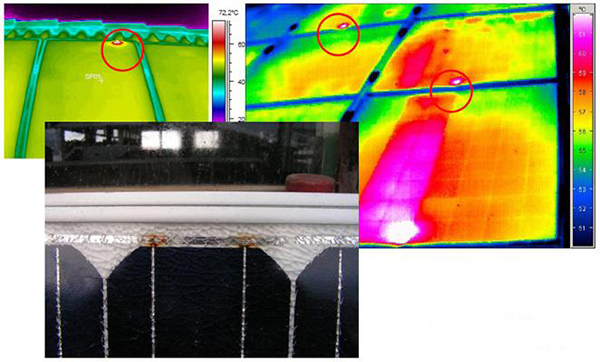 The following figure shows the infrared photo of the PID effect. The cells with serious PID effect are blackened.

In addition to the above monitoring, the visual inspection of the components is also very important. Such as back scratches, yellowing, bubbling, and connector dropout of components.

Food Grade Salt produced from Sea Salt gives a slightly different taste than Table Salt produced from Rock Salt, and is believed to be better from ordinary table salt in taste and texture. It can serve as a good substitute to regular table salt because, although it lacks sufficient iodine, it contains several other healthy minerals not found in table salt, including potassium, magnesium, calcium, and sulfate. We produce an A+ Food Grade Sea Salt was human consumption.