Don't forget to join forces and create a joint effort

Never forget the first heart of the relay to create a future self - driven.

On January 15th, the Changzhou Furniture Chamber of Commerce held a grand symposium on the theme â€œForget the heart and create the futureâ€â€”the 2018 theme conference and the spring party.

The main leaders and guests who were invited to attend the conference were: Vice Chairman of the Municipal Federation of Industry and Commerce Yan Ronghui and Deputy Director Chen Minghua, Deputy Director Wang Jianghua of the Civil Affairs Bureau and Director Zhu Huanan, President Feng Jianhua of the Provincial Family Association, and leaders of the Alliance of Friendly Furniture Association, etc. And the Secretary-General of the Chamber of Commerce of the municipalities directly under the city.

The conference opened the curtain in the singing of the majestic "National Anthem"!

According to the recommendations of the Democratic Party and the deliberation of the Council, the year 2017 was honored with 2 Outstanding Contribution Awards, 16 Outstanding Member Units, 8 Outstanding Director Units, 1 Outstanding Vice Presidential Unit, and Outstanding Membership. Group "1. The award ceremony is simple, grand and warm! The winning units and individuals are full of energy and energy!

Outstanding member and photo of the award leader Zhao Huichang

Zhang Xinggang, Vice President of the Outstanding Member Group, and Chairman of the Awarding Leading City Federation of Industry and Commerce

7Leadership speech - affirming the past

The Deputy Director of the Municipal Civil Affairs Bureau Wang Jianghua, the President of the Provincial Association Jia Jianhua and the Vice Chairman of the Municipal Federation of Industry and Commerce Yan Ronghui made important speeches respectively. The three leaders all fully affirmed that the Changzhou Furniture Merchants Association had made remarkable achievements in various work in 2017, and put forward the ardent expectations and demands for the work of the Chamber of Commerce in 2018 that are forging ahead with unity, making persistent efforts, innovating and pioneering, and creating brilliant achievements.

Speech by Wang Jianghua, Director of the Social Organization Management Office of the Civil Affairs Bureau

9 The Fifth Session of the Third Board of Directors

Before the conference, the council of the chamber of commerce held the "3rd Meeting of the 5th Board of Directors". This is a meeting of "opening the first chapter and innovating articles."

The â€œFirst Assessmentâ€ in which â€œthe 35 members of the participating committee are assessed on a one-person-one-vote basis with respect to each of the presidentâ€™s annual work performancesâ€ is counted as a percentage of the annual assessment by 30%. After the summary, the results are announced on the spot.

The first "opening chapter precedent" was made for "regarding compliance with regulations and exercising the power of appointment and dismissal." The Board of Directors reviewed and passed the decision on the appointment of the â€œregular directors, directors, and new membersâ€, and also considered and passed the â€œthree disqualifications and disqualificationsâ€ decision for the first time. This is not only an effective practice for the Chamber of Commerce â€œto organize according to chapters and regulations, but also to manage according to regulationsâ€, and is also the best choice for â€œdoing things according to the rules and managing according to regulationsâ€.

Board of directors attending the meeting seriously considers various agendas

In the 2018 Spring Festival Evening Party, with the stunning appearance of the host and the wonderful speech of President Wang Hanxin, the atmosphere of the party rose steadily and gradually became better!

A round of lucky draw is not only nearly 100% winning face, and one after another lottery kept non-stop, winning more than a few thousands of thousands of awards even caught everyone's attention! Waiting for winning! The joy of winning! The scene is magnificent and shocking!

A wave of WeChat red envelopes endlessly, grab stop. Grabbing high and colorful, satisfied, unable to grab the hope of running, happy. This scene, the momentum, climaxes, it's lively, can not help!

Thank you very much for the support of the sponsors of this annual meeting! 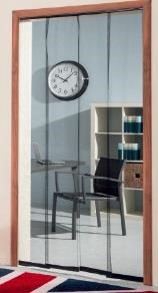 High quality polyester fabric, UV-resistant, washable, light and air permeable, , durable, good wind resistance performance, easy installing, EN13561-2015 certification.
Use the hook and loop tape fixed the products on the door wall
Easy to take off it when you don't need it
Natural insect protection with open door
All the fabric have the Grey Scale Level 5 performance under the xenon-arc lamps with the condition ISO 4892-2:2013 cycle 1.
As the professional Insect Screen supplier, we cooperated with consumer from all the world to settle the insect problem.